To learn more about resources on effective government leadership, check out the Partnership’s Public Service Leadership Model’s website. For more on leadership in the federal government, please read these blog posts: 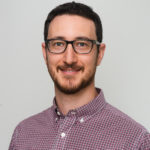