John Gilligan
Close
Back to All Staff

John M. Gilligan is executive chairman of the Center for Internet Security, a nonprofit cyber security company. He is also co-chair of the AFCEA Cyber Committee and president of the Gilligan Group, Inc., a cyber and IT consulting firm.

Previously, he served as president and chief operating officer of Schafer Corporation and earlier as senior vice president of the defense sector at SRA International, Inc. Mr. Gilligan has more than 25 years of managerial experience in leading large information technology organizations. He has expertise in business strategy, organizational innovation, program implementation and cyber security. Mr. Gilligan has served as the Chief Information Officer for the U.S. Air Force and the U.S. Department of Energy. He was program executive officer for battle management and command and control for the Air Force. He was a member of the Cyber Task Force which developed the report, A Cybersecurity Agenda for the 45th President, and the predecessor Cyber Security Commission, which was formed to advise the 44th President. He serves on the boards of the Software Engineering Institute, AFCEA and Roundarch Isobar. Mr. Gilligan has been a recipient of the Joint Chiefs of Staff Distinguished Civilian Service Medal, Distinguished Executive Presidential Rank Award, Meritorious Executive Presidential Rank Award, and Computerworld’s Premier 100 IT Leaders to name a few. He earned an M.S.E. in Computer Engineering from Case Western Reserve University and an M.B.A. in finance from Virginia Tech University. Mr. Gilligan also serves as a Strategic Advisors to Government Executives Co-Chair for the Partnership for Public Service. 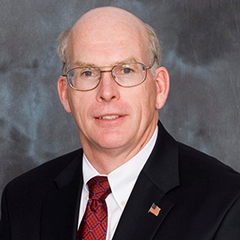