A former federal prosecutor at the Department of Justice discusses the value of a public service career
Close
Opportunity is calling: Professor Eileen Harrington looks back on a career in public service
Back to Blog

To solve our nation’s biggest challenges both today and in the future, our government needs to recruit and retain vital young talent. Our new blog series, “Academic Profiles in Public Service,” will reinforce these efforts by featuring professionals working in academia who previously served in the federal government. These profiles aim to inspire students and recent graduates to consider a career in public service and highlight the positive impact federal employees can make on our country. David Grise, retired federal prosecutor at the Department of Justice and current Legal Studies professor at Morehead State University, discussed with us the value of a career in public service.

Why were you interested in public service? What kept you in the federal government for so long?

Grise: I graduated from law school with a deep interest in the public good, and I felt that I could do work at the Department of Justice that was consistent with my personal values. The federal government also allowed me to hit the ground running. They don’t have enough employees for people to carry someone else’s briefcase.

I also wanted to work in a place where my own financial benefit would not be impacted by my decisions, which left me free to do what I thought was right. This allowed me to concentrate on practicing law, as opposed to being a businessperson.

How did you come to realize that the federal government was a place where you could make a difference?

Grise: I had a professor in law school who told me about all the things he got to do as an employee of the Department of Justice. And when I look back on my career now, I am very thankful that I was there for 32 years because I got to do really interesting things all within the department.

I remember going two miles deep into a coal mine, interviewing pathological liars and praying with victims. I sat next to the attorney general of the United States as he testified before Congress. I got all of these experiences, including the ability to work overseas for three years in the U.S. Embassy in Albania, without ever leaving the Department of Justice.

Was there a moment in your career that affirmed your passion for public service?

Grise: When I had worked for the department for just two weeks, I attended a meeting where the lawyers reviewed each other’s cases, and I was asked for my opinion. I was very grateful that I worked in a place where, even though I had very little experience, the people who had been there for 30 years turned to me and said, “What do YOU think?”

Another moment that let me know I was in the right place was when I won in court on an issue, but the judge made the decision on the wrong basis. When I asked a colleague for advice on how to proceed, she asked me, “Did you get a job with the Department of Winning, or with the Department of Justice?” So I told the court about my concerns with the basis of the decision, and eventually became the ethics advisor for about 100 people within the department.

What was your biggest accomplishment working in the federal government?

Why do you think it’s important for young people to go consider a career in public service?

To learn more about pursuing a career in the federal government, visit gogovernment.org and read the first post in the Academic Profiles in Public Service series featuring Eileen Harrington, former executive director of the Federal Trade Commission and current professor of political science at the University of Wisconsin-Madison.

Contact us at [email protected] if you, or someone you know, would like to be profiled in the future.

Sarah Heppen is a former intern on the Partnership’s Federal Workforce team. 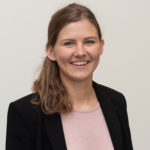 Madeleine McCullough is an associate on the Federal Workforce team. She supports strategic human capital work within various federal agencies.